How much do you know about sulfite pulping

The earliest sulfite pulping process was the traditional acid sulfite process, invented by American B.C. Tillman in 1867. The first sulphite pulping plant was built in Sweden in 1874. This pulping method is low in cost and low in production cost because the main chemical raw materials used are sulfur and limestone. The resulting pulp is lighter in color and can be used directly to produce many varieties of paper without bleaching. The purity of the pulp is high and it is easy to further process and refine. These important advantages make sulfite pulping the most productive chemical pulping method between 1890 and 1937. However, this traditional acid sulfite method has a wide range of adaptation to plant materials. This method should not be used for pines and some broadleaf wood and grass materials. The cooking waste liquid produced by the pulping process lacked a good recycling method at that time, which caused serious environmental pollution after discharge.

Cooking is the core of sulfite pulping. In the cooking process, the entire physical and chemical reactions are roughly divided into two types. 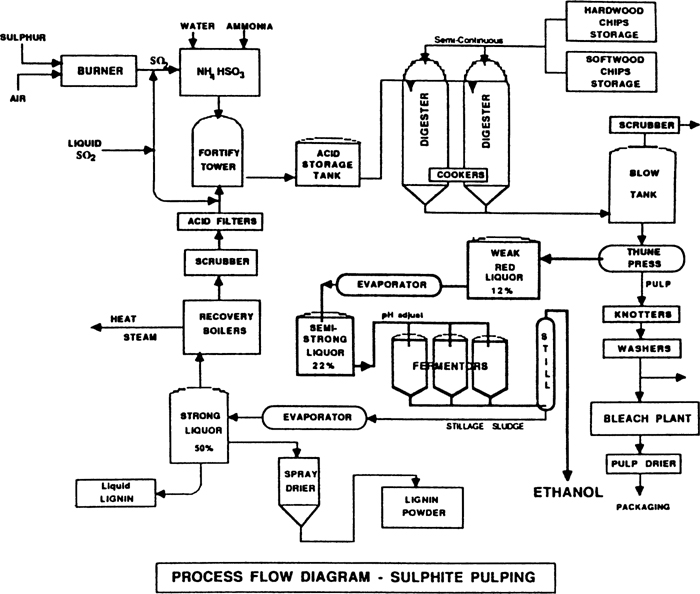 The cooking waste liquid separated by washing from the steamed slurry contains the eluted product formed by the reaction of the cooking liquid with the fiber raw material and the residual cooking liquid. This waste liquid has a high biochemical oxygen consumption and a deep color. If it is directly discharged into a water body, it will cause serious environmental pollution. Therefore, the treatment and utilization of cooking waste liquid has become an important part of sulfite pulping. Waste liquids are basically divided into two categories: waste liquids produced by cooking in alkaline cooking liquor are generally called black liquor; waste liquids produced by cooking in acidic cooking liquor are generally called red liquor. The composition of the red liquor solute varies greatly depending on the raw materials used and the cooking liquor. Among them, the inorganic substances are mainly residual cooking liquid components and inorganic salts which are eluted from the raw materials. The organic matter is mainly a hydrolyzate of lignosulfonate eluted from the raw material, and a hydrolyzed elution after degradation of the hemicellulose and cellulose. Hexoses are mainly used in wood pulp red liquor, and pentoses are mainly in straw pulp red liquor, and a small amount of lower alcohols and aldaldehydes are present. Among the elemental compositions of the red liquid dry solids, carbon accounts for about 32%, hydrogen accounts for 3.5 to 4.5%, and sulfur accounts for 3 to 10%. Therefore, at an appropriate concentration, the red liquid can be burned to have a certain calorific value, and the low calorific value of the 1 g red liquid dry solid is about 1200 to 1800 J. These characteristics of red liquor make it possible to carry out comprehensive utilization or recovery of inorganic chemicals and heat by concentrated combustion.

How to deal with the sewage in paper mill?

There is much sewage during the production of making paper pulp, how to deal with it? This is very important, here you can get some ideas....

How to improve China's pulp and paper equipment manufacturing industry innovation and development is a big problem now, here we can discuss this together!...