The twin-roller press uses the pressing principle to complete the entire work process. The slurry is pumped into the horn-shaped dewatering zone composed of the press roll of the twin-roller and the tank body. Due to the certain pressure generated by the slurry, the filter is dehydrated by the porous roller filter plate and discharged through the openings at both ends of the roller. A continuous slurry layer is formed on the roll surface. As the press roll rotates, the concentration of the slurry gradually increases with the rotation of the press roll, which can reach about 10% (or the slurry is in contact with the washing liquid when the displacement zone is reached, and the original filtrate in the slurry is replaced, and this displacement is always performed. Until the slurry enters the press area). The slurry continues to enter the pressing zone between the two press rolls as the press rolls rotate, and the slurry concentration is further increased by press dewatering, up to about 30%. The pulp cake formed in the press zone between the twin rolls can be peeled off from the roll surface by two sets of scrapers, into the discharge spiral, and then shredded by the crushing screw and discharged out of the twin roll press. 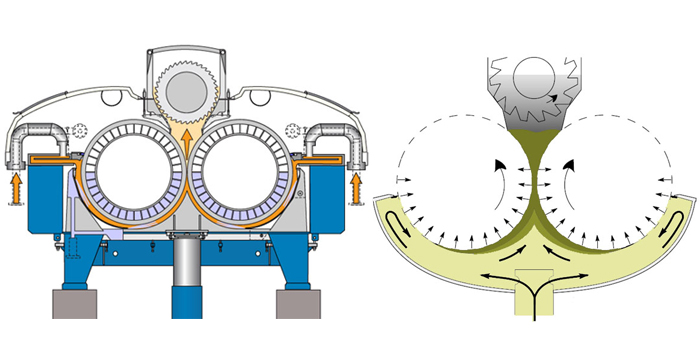